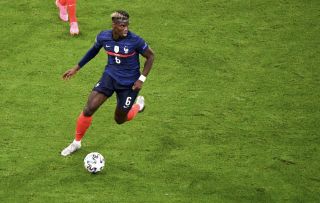 Midfielder Paul Pogba has lifted the lid on what would make him happiest when playing for both Manchester United and France.

Having put in an incredible performance for Didier Deschamps’ Les Bleus last night, France, who faced Germany in their first Group F game in this summer’s Euros, were excellent from start to finish.

Despite narrowly winning by just one goal to nill, France looked the more dangerous of the two sides in attack and displayed resolute defensive qualities.

One player who stood out from the rest was Red Devil Pogba.

Having commanded midfield, alongside the likes of Chelsea’s N’Golo Kante and Juventus’ Adrien Rabiot, Pogba was superb all over the pitch.

Speaking after the game, the 28-year-old who spoke alongside Patrick Vieria, lifted the lid on where his preferred position is.

“I would like to play more offensive,” Pogba told L’Equipe (as quoted by MEN) “To score fifteen goals per season is what I would like.”

“But Patrick said it, we must put ourselves at the service of the collective. In Manchester, as in blue (the France team), the collective will always come before the player.”

Pogba has featured in several different positions for Ole Gunnar Solskjaer, including as a left-sided winger.

Clearly at his happiest when allowed to roam into more advanced areas, the Frenchman’s recent admission will surely prompt his club manager to reassess how to get the best out of his star midfielder.