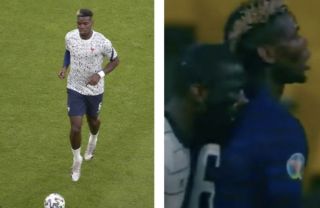 However, despite what was a great encounter, the game wasn’t without its controversy.

During the first half, Chelsea defender Antonio Rudiger and Pogba clashed with the German centre-back appearing to bite his French opponent.

In what was an odd moment, fans and pundits were left confused by what they had just seen.

However, speaking after the game, United’s Pogba revealed what happened and insisted there are no hard feelings.

“He nibbled a little bit and I felt it so I told the ref,” Pogba told reporters (as quoted by MEN) “But I am not crying for a yellow or a red card.”

“He has not received any card and I don’t want him suspended because of that situation. We hugged at the end and it’s over.”

Pogba and his France teammates are next in action on Saturday when they will face Hungary in a 2pm (UK time) kick-off.