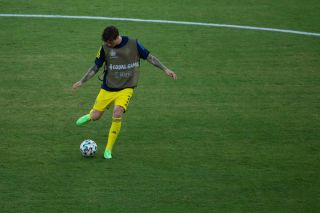 A collective effort from Sweden to keep Spain out tonight but Manchester United centre-back Victor Lindelof performed heroically at the back.

While United’s goalkeeper headache worsens with EURO2020 (both David de Gea and Dean Henderson were overlooked for their country’s opening matches), I enjoyed watching Victor Lindelof tonight, not having to worry if he made a mistake or two. I’m sure he also feels a different type of pressure when representing the biggest club in the world and his country — when every corner of the globe is watching.

Lindelof gave a good account of himself against the Spanish, who are always at a loss when starting Alvaro Morata, but collectively they did everything but put the ball in the back of the net.

The problem with Lindelof is he’s never shy of a mistake, but hopefully Sweden can build momentum on this result and he has a good tournament. It won’t change the fact United need to buy a new centre-back, although a better Lindelof makes for a better United.

Statman Dave has shared some impressive Lindelof stats from the game during which he had a 100% long pass accuracy rate, 9 clearances, 2 blocks and not a single foul.

Played a key part in a vital clean sheet. 🔑 pic.twitter.com/vQYiOr5Ga1

Squad depth will be important next season when we’re trying to grind out tricky wins.