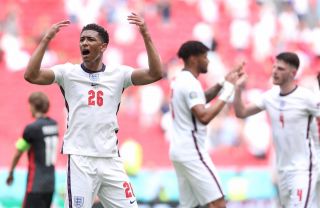 Get Jadon Sancho now and worry about Jude Bellingham later.

A player I would like to think Manchester United are still monitoring is Borussia Dortmund’s Jude Bellingham.

At 17, the midfielder came on as a sub for England in their EURO2020 win over Croatia.

It’s probably not the right time for United to make another move, however, with Dortmund said to be preparing a fresh contract offer for the teenage sensation. They are willing to sell Sancho this summer, who guarantees them a huge profit, presumably with the idea of Bellingham pushing on to become the next star in their team along with Erling Haaland.

The Bundesliga outlet won the race to Bellingham’s signature last summer when he made the move from Championship Birmingham. He looks a real player and impressed in the Champions League last season, certainly doing enough to warrant rekindled interest in the future.

Manager Ole Gunnar Solskjaer should look to make at least one signing in midfield this summer, but even at that the midfield is a work in progress. A player like Bellingham should be on the club’s radar and I have no doubt in my mind that his stock will rise significantly.