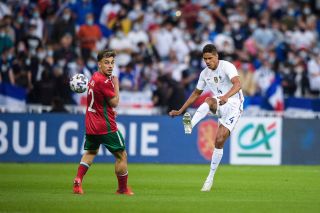 We, like many Manchester United fans, called for a top class centre back last summer when it was clear Harry Maguire needed a better defensive partner than either Victor Lindelof or Eric Bailly. Now it sounds like one will be available this summer.

It’s not often centre backs like Real Madrid’s Raphael Varane become available on the transfer market. Usually, at Real Madrid, they keep their best players who willingly renew their deals every few years.

However, that does not appear to be the case with Varane, who has already won the lot at Madrid.

Reports are suggesting the La Liga outfit ‘would sell Raphael Varane for around £52million’ this summer, as cited by the Daily Mail, with the French defender linked with Manchester United.

Spanish show El Partidazo de COPE claim that Madrid would be willing to listen to offers for Varane in the current transfer window and have set a reasonable asking price of €60m.

Rubbing your hands together yet?

I would hold fire for now – knowing what penny pinching has gone on for the past under the controversial Glazer ownership. It’s definitely a time to ask ‘are they willing to push the boat to see United win the Premier League again?’ I don’t think we are that far away from competing with Man City, who next season will desperately want the Champions League, but a top class centre back is absolutely essential before the transfer window shuts.

Varane has one year left on his contract at the Bernabeu and has shown little inclination to extend his decade-long stay with the club. He is currently with the French team ahead of Euro 2020.