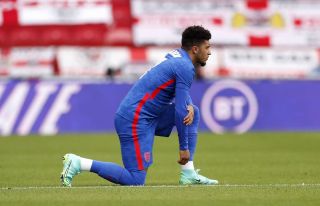 Reports claim Manchester United will wait until after the Euros to announce the transfer of Jadon Sancho.

It is understood that the club are locked in negotiations with Borussia Dortmund and have agreed personal terms with the England winger on a five-year contract, as per Fabrizio Romano.

Manchester United reached an agreement with Sancho’s camp on personal terms until 2026. Jadon is not creating any problem. 🔴 #MUFC

In addition The Sun claim BVB want United to increase their offer of £61m to £78m, with a further £10m in add-ons – and it is expected that a deal will be reached between the two clubs.

The German club want the transfer completed by July 23, when the Bundesliga outfit head off on their pre-season training camp.

Sancho spoke to the press last night about United’s players asking him questions on England duty. All transfer related we’re sure.

He said: “Of course, all the boys have a lot of questions. When you do well, speculation is always going to come around.

“I just tell the boys, ‘look, I’m focused on football at the moment’ and we just focus on the Euros, step by step.”

There will be plenty of excitement in the camp since Sancho is close friends with United players like Marcus Rashford. And next season there’s a good chance they will both be playing together for club and country.

The winger also told talkSPORT that he is ‘cool’ about the transfer speculation rather than distracted.

“No, I’m cool about it,” Sancho said. “It’s just how you handle that on the pitch, so just keep doing what you’re doing.

“If you keep doing that then I’m sure it won’t be a problem because the main thing is my football and that’s what I’m focused on at the moment.”

Fingers crossed that the deal goes through smoothly after missing out on Sancho last summer. At least United’s approach has been more aggressive this summer.