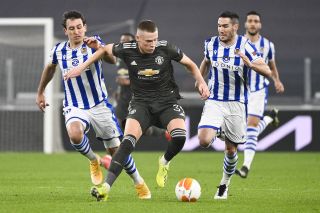 Manchester United are hot on the heels of Jadon Sancho but reports of alternatives are starting to surface and Real Sociedad’s Mikel Oyarzabal has emerged as a player of United’s interest. The winger is one of the most exciting players in Spain and is set to be one of his nations most prominent players at this summer Euro’s.

Solskjær had the opportunity to watch Oyarzabal first-hand earlier this season when his side took on Real Sociedad in the Europa League and will be aware of why he is so highly rated.

The 24-year-old featured 33 times for his club in La Liga last season, scoring 11 times in the process, at an average of a goal every three games.

The Athletic cover the winger in their pre-Euro piece, also mentioning that former Manchester United manager David Moyes handed Oyarzabal his debut in 2015.

The report speculated over a transfer, and although links to Manchester City have been more distinguished, Real Madrid and Manchester United have been credited with interest.

Luis Enrique is set to unleash his wildcard in just four days when his side take on Sweden in Euro 2020.