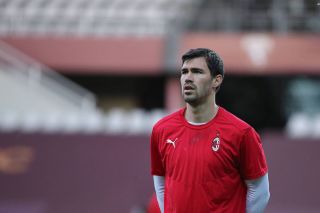 Manchester United are set to go face-to-face with some of Europe’s elite as they are ready to battle it out for AC Milan’s Alessio Romagnoli. The 26-year-old is out of contract at the San Siro next year and his club are reportedly ready to cash in, rather than lose him on a free transfer in 12 months.

According to MilanNews, the Italian club are in conversation with the defender over his future and a possible extension but are aware that with one year remaining on his contract, other clubs could be circling.

Simon Kjaer’s brilliant debut season and Fikayo Tomori’s emergence in the second half of the season has seen Romagnoli fall out of favour under Pioli and could be considering his future.

The report goes on to add that Romagnoli is mainly ‘admired’ by Barcelona, but also by Manchester United, Paris Saint-Germain, and Tottenham. Recently snubbed from Italy’s Euro 2020 squad, the AC Milan captain could be ready to leave his club.

Manchester United have a longstanding interest in a centre-back and are looking for a partner to Harry Maguire. Solskjær prefers to have one right-footed centre-back next to a left-footed, which would work with Romagnoli.