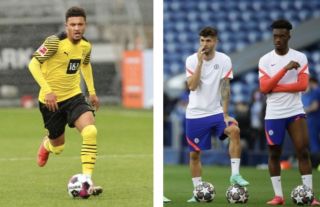 Manchester United appear to be edging closer to striking a deal with Borussia Dortmund for English winger Jadon Sancho. However, with the deal not yet over the line, according to recent reports, the Red Devils’ hierarchy have drawn up a three-man alternative shortlist.

United have been in the market for a right-sided attacker for quite some time now, with Dortmund’s Sancho seemingly Ole Gunnar Solskjaer’s first choice.

After famously missing out on a late deal last summer, this year could finally be the window that fans see Sancho arrive at Old Trafford.

However, although talks are reportedly progressing, in an attempt to plan for all eventualities, according to a recent report from the Express, United have identified Barcelona’s Ousmane Dembele, Juventus’ Cristiano Ronaldo and Chelsea’s Callum Hudson-Odoi as three possible targets.

Dembele was linked with a move to United last summer and although a move failed to materialise, the Express suggest the Red Devils’ interest has not died down.

United’s pursuit of Dembele could be boosted after recent reports suggested Barcelona have put the Frenchman up for sale, as per Sport.

Elsewhere, former star Ronaldo continues to be linked with a move back to Old Trafford, 12 years after departing, however, MEN claim the club have no interest in bringing the Portuguese superstar back to the club.

Lastly, the final name reportedly on the Red Devils’ shortlist is understood to be Chelsea’s Hudson-Odoi.

Having failed to nail down a spot in Thomas Tuchel’s first-team, the English winger continues to see his playing time heavily restricted.

In an attempt to reignite his career and offer him an escape from his Stamford Bridge nightmare, the Express believe a move to Old Trafford could very well be on the cards.