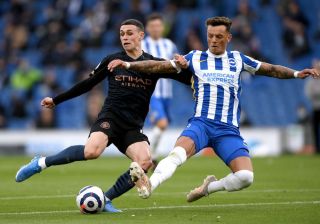 According to recent reports, Premier League quartet, Liverpool, Arsenal, Tottenham Hotspur and Manchester United are all in the running to sign Brighton and Hove Albion defender Ben White.

That’s according to the Mirror, who claims ahead of this summer’s transfer window, the young centre-back is a man in demand.

Since arriving at Brighton, White has gone on to force his way through the club’s youth ranks, and with the help of a successful loan spell with Leeds United, later broke into the Seagull’s senior first-team.

Having made his senior debut in 2016, the English defender has gone on to feature in 42 matches, in all competitions, directly contributing to five goals, along the way.

In light of what has been an impressive breakthrough, especially during the latter parts of the most recent 2020-21 domestic campaign, White has recently earned himself a place in Gareth Southgate’s final 26-man England squad for this summer’s Euros.

However, despite currently preparing to play a role in his country’s up and coming international tournament, White has seen his name linked with a big, domestic summer move.

Having already been strongly linked with a move to join Ole Gunnar Solskjaer at United, the 23-year-old is reportedly also wanted by Liverpool, Arsenal and now Tottenham Hotspur, too.

Read more: Mourinho takes swipe at Solskjaer after ‘another season without trophies’