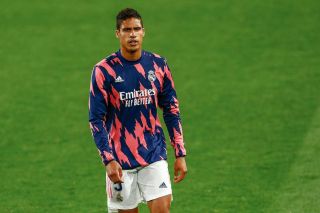 Raphael Varane has been linked with a move to Manchester United for many years but the club will feel like there hasn’t been a better opportunity to get their man. The defender has just one year remaining on his contract at Real Madrid and looks no closer to agreeing an extension.

Reports last week claimed that the France international could be snapped up for as little as €35 million this summer, and the 27-year-old has reportedly peaked the interest of Manchester United again this year.

And Marcus Rashford has now teased Manchester United fans all over the world in a new interview, waxing lyrical about the Real Madrid stalwart.

“I thought when we played Real Madrid in a friendly, that Varane played and he was quite tough,” Rashford told ManUtd.com when asked about the toughest defenders he’s come up again.

Manchester United are in the market for a centre-back this summer and will continue to look for a long-term partner to Harry Maguire, who is one of the first names on Ole Gunnar Solskjær’s team sheet.

According to Manchester Evening News, the club has held talks with Raphael Varane’s representatives.