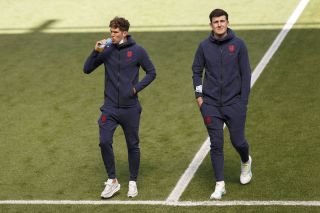 England have been dealt a huge blow to their Euro 2020 chances after Harry Maguire was ruled out of their opening group game against Croatia. The defender has been a doubt for the game since the squad was announced but after being the only absentee in training, the United skipper has now been ruled out.

Gareth Southgate was optimistic over the 28-year-olds chances but has been forced to admit defeat, with Maguire’s ankle injury proving to be more serious than previously thought.

According to the Independent, Maguire was the only England player not to take to the training field this morning as preparations begun for a repeat of the 2018 World Cup semi-final.

The defender is now set to miss the match amid concerns over his fitness. Maguire will now continue rehabilitation and will continue doing gym work.

Marcus Rashford has been cleared fit after a troublesome second half of the season. The United winger is expected to have surgery on at least one of his injuries after the tournament this summer. Mason Greenwood pulled out of the squad late last month after discussions with his club.