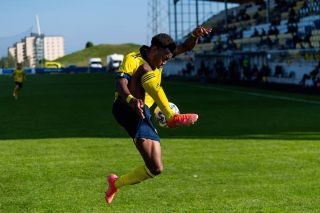 Anthony Elanga, one of a handful Manchester United players to make their debut at the end of last season, could leave the club this summer in hunt of first-team opportunities. The Swedish youngster has impressed in his first few appearances, scoring his first Premier League goal on the final day of the last campaign.

The 19-year-old also received his first call-up to Sweden’s U21 national team, capping off a good end to the 2020/21 season, having initially struggled this calendar year with a bothersome shoulder injury.

According to Manchester Evening News, the winger is planning to sit down with the club and discuss his options this summer. Elanga is believed to be open to a loan move in order to maintain his development.

“When this get-together is over, I will sit down with the club and discuss what is best for me for next season,” Elanga told Fotbollskanalen. “You must be ready if they want to send you out on loan or back to the U23 team. I can not say that I play for the A-team yet.”

Elanga is expected to be named in Ole Gunnar Solskjær’s pre-season squad and should a decision not have come before then, the youngster will be given the chance to make a name for himself ahead of next season.

Mason Greenwood, Tahith Chong and Angel Gomes all impressed in pre-season two years ago and Elanga will be hoping to do the same.