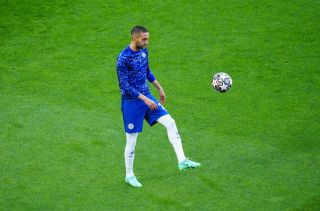 Manchester United have been alerted after it emerged that Chelsea are open to selling £34 million star Hakim Ziyech. The Moroccan winger has struggled in his first season at Chelsea and the London club are reportedly willing to cut their losses on the 28-year-old.

Frank Lampard brought Ziyech to the club for a reported £34m in 2020 but after troublesome injury issues and falling out of favor under Thomas Tuchel, other clubs are getting ready to capitalize on the mishap.

That’s according to Calciomercato, who claim that the west-London club are ‘open to selling’ their star this summer after a disappointing season. AC Milan and Napoli are suggested as possible destinations for Ziyech.

It’s looking unlikely that the former Ajax man’s future is at Chelsea, with Pulisic, Mount, Havertz and Werner all believed to be ahead of him in Thomas Tuchel’s pecking order.

Manchester United are locked in negotiations with Dortmund over a move for Jadon Sancho, but Ziyech could be seen as a cheaper alternative should the club fail to land their number one target.

Ole Gunnar Solskjær will already have written up his lists of targets for the summer but an opportunity to sign a competent rival won’t go amiss the Norwegian.

The manager has long lobbied for a right-sided winger and despite the emergence of Mason Greenwood and Amad Diallo, it remains a concern going into his third full season in charge of the team.