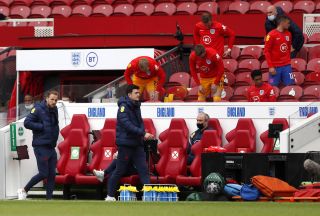 Gareth Southgate has been given an invaluable boost ahead of England’s Euro curtain-raiser against Croatia on Sunday. His side narrowly beat Romania in their final warm-up game but revealed after the game that Harry Maguire is ‘progressing’ in his recovery bid.

Maguire is one of many injury concerns for the England manager. The 28-year-old has been out of action for a month with ankle ligament damage and is yet to resume full training, just four days before the tournament kicks off.

But signs are that he could be in contention for action later in the competition. “Maguire’s progressing well – the last few days have been very positive,” Southgate said according to The Sun. “There’s still a little bit of work to be done, but he’s definitely heading in the right direction and we’re very pleased with the progress over the last few days in particular.”

It’s also claimed in the report that the United skipper is back running in England training, a big sign that Maguire will be available at some point in the competition.

Maguire recovered from a tumultuous summer and tough start to the season to emerge as one of Manchester United’s most important players. The former Leicester and Hull defender had played every minute in the Premier League since he arrived in 2019 before suffering the injury early in May.

Read more: Man United set to give Man City transfer boost as they close in on £80m star