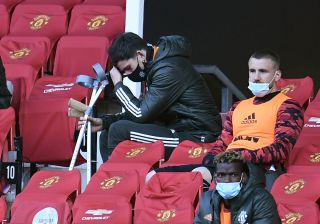 Gareth Southgate and England have been given a priceless injury boost ahead of this summers Euro’s with news that Harry Maguire is stepping up his rehabilitation from an ankle injury suffered last month.

The United skipper has missed the last month of action and only just recently joined up with his England teammates after being picked in the final 26-man squad.

But there are positive news after Sky Sports reported early on Friday morning that the defender has been doing gym work in latest attempt to prove his fitness.

Although doubts over his availability for England’s first game against Croatia on June 13 remain, Sky say that the ‘signs are positive’ for the defender but the situation is described as a ‘race against time’.

Manchester United and Ole Gunnar Solskjær will be hoping that Maguire is not rushed back to action too early. Ankle ligament damage are precarious injuries and premature returns to football could spell bad news for the upcoming season, a big one in Ole’s improving side.

United are thin in that department and can’t afford to not have Maguire available for the start of the season, which is scheduled to start in the second week of August.