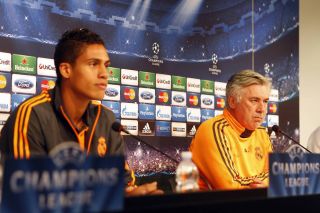 According to reports in Spain, the arrival of new Real Madrid manager Carlo Ancelotti could prompt several high-profile departures.

Possibly every Manchester United fan out there is hoping one of those will be Raphael Varane — and that he ends up at Old Trafford — after we ran old quotes from the French defender about his previous spell under Ancelotti at Madrid.

United have been strongly linked with signing a new centre-back this summer, with Harry Maguire needing a better defensive partner than Victor Lindelof, Eric Bailly and Axel Tuanzebe.

There’s been several defenders linked to the club as a result, including Madrid’s Varane.

The latest from that saga comes from Marca, who claim that arrival of Ancelotti could signal a major club rebuild.

One is definitely required if Ancelotti aims to lead Madrid to European glory, but does getting rid of Varane put them in a stronger position? Hardly on top of other absentees.

But all suggestions from Spain pretty much suggest that Varane is looking to start a new chapter in his career.

It goes without saying that Varane is the best option United could get this summer. Who else would you like to see the Red Devils target at the back, if the Real Madrid defender decides to give work under Ancelotti another shot?