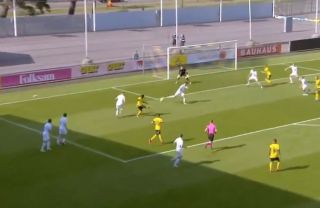 Anthony Elanga has enjoyed a brilliant last few weeks after making his Manchester United senior debut before scoring on the final day of the Premier League season. The young Swede was one of the several youngsters thrown in the deep and for United’s home game against Leicester last month and has made a lasting impression.

The calendar year didn’t get off to the best of starts for Elanga – the youngster missed large parts of it through a troublesome shoulder injury but returned from it stronger than ever. He impressed for U18’s and U23’s before eventually making the step up to senior team training.

The 18-year-old capped off a rapid rise by scoring a bullet header at Wolves two weeks ago, which also earned him his first call-up to Sweden’s U21’s.

The goal was a trademark Elanga goal, cutting in from the left-hand side and burying the ball in the far corner. Elanga scored the second goal of the game as Sweden ran out 2-0 winners over their Scandinavian rivals.

Solskjær is believed to be a big fan of Elanga and was heard giving words of encouragement to the youngster in the moments before United’s 2-1 loss to Leicester last month. The youngster was promoted to first-team training at the tail-end of last season and will be looking to impress in pre-season.