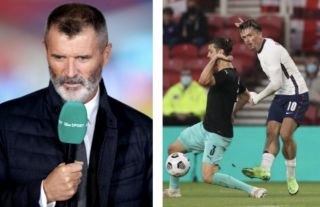 Aston Villa midfielder Jack Grealish was back in action on Wednesday night. Named among Gareth Southgate’s starting 11 to face Austria in a pre-Euros friendly, Grealish was arguably one of the best players on the pitch. The exciting attacking midfielder’s latest performance has since earned him some of the highest possible praise from former Manchester United captain Roy Keane.

Following what was a decent performance from the Three Lions, standout performers included both Grealish and Arsenal youngster Bukayo Saka.

The Villa skipper grew exceptionally well into the game as he relentlessly carried the ball with genuine purpose.

Although failing to get on the scoresheet himself, Grealish and England, thanks to Saka, did go on to claim a well deserved 1-0 victory.

Relentlessly linked with a switch to Old Trafford, United fans would have been excited to hear Keane’s assessment of the 25-year-old.

Speaking after the international friendly, Keane (as quoted by MEN), when asked for his thoughts on Grealish, said: “He is the star man, he makes things happen. He has courage and always wants the ball in tight areas.

Read more: Juventus plotting midfield rebuild as Pogba return tipped but only on one condition