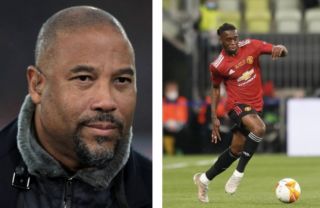 As the delayed summer European Championships edge closer to kicking off, many fans and pundits have been weighing in on England manager Gareth Southgate’s confirmed 23-man squad.

The Three Lions boss announced his final 23-man squad for this summer’s Euros earlier this week.

One of the major talking points was how many and which right-backs the England boss would include.

The ex-pro’s decision to include all four full-backs meant that sadly, there is no place for Manchester United’s Aaron Wan-Bissaka.

Wan-Bissaka has been a regular for Ole Gunnar Solskjaer ever seen he joined from Crystal Palace two years ago.

However, after continuing to be snubbed for a place in his national side, criticism of Southgate has come from an unlikely source.

Speaking recently to BonusCodeBets (as quoted by MEN), ex-Liverpool man John Barnes said: “Look at Aaron Wan-Bissaka – he is our best right-back by far in this country. But because he is not as good on the ball as the others, he got unfairly overlooked.

“So when we come up against a team like France, that is when you don’t need a marauding player who will be more comfortable whipping in crosses and free-kicks in attacking areas.

“Everyone is clamouring for attacking right-backs or number tens, but do not pay enough respect to players who are out and out defenders or defensive midfielders.

“It doesn’t matter if Southgate plays four or five at the back, if you don’t have players who can defend properly, it is immaterial.”

The defender is best known for his defensive capabilities, something Barnes clearly recognises.

However, another trait of the full-back which often goes under the radar is just how durable and fit he is.

During the most recent 2020-21 season, Wan-Bissaka featured a whopping 54 times, in all competitions, for United.

Should Wan-Bissaka have been included in Southgate’s England squad? – Let us know in the comments.