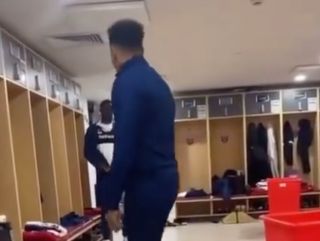 In quite extraordinary news as Jesse Lingard prepared to face Albania on Wednesday, the Manchester United midfielder was endorsed by Michael Jackson’s official Instagram page. Having been left out of England’s Euro squad, Michael Jackson shared a viral clip of Lingard ahead of tonights match.

Lingard has always been one for dancing to set a certain mood but he couldn’t have asked for better motivation in his quest to prove Gareth Southgate wrong.

The viral clip below went viral earlier this year after West Ham had beaten Tottenham and ‘The king of Pop’ has given his approval. “Nothing like some Michael Jackson to get Manchester United star Jesse Lingard ready for the next big game!,” a message next to video read.

Lingard has earlier revealed that he used dancing to uplift himself and others in difficult times and you don’t have to look far to see that it runs in the family. His brother, Louie Scott, is a dance instructor.

Michael Jackson is also believed to be one of Lingard’s childhood heroes, making this public approval even more endearing.

Read more: Pau Torres responds to reports linking him with move to United