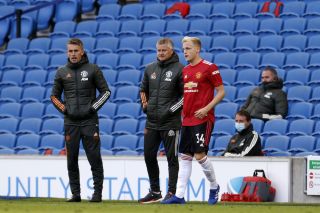 Former Tottenham midfielder and Holland legend Rafael van der Vaart has urged Donny van de Beek to leave Manchester United after a tough first season for the former Ajax man. Van de Beek has struggled to cement a starting place in Solskjær’s side and has been limited to mostly substitute appearances.

Van de Beek featured in just 19 Premier League games last season, starting only 4 of them, making up a total of 511 minutes in his debut season. 10 of those 19 appearances came from the bench after the 80th minute mark and he has now been urged to find a new club by Van der Vaart.

“He fitted perfectly into the Ajax system, but he doesn’t fit at United,” Van der Vaart told ESPN. “If you have the opportunity to go to a team that suits you better and it’s an attractive team, I would definitely go for that.

“If nobody leaves United, he will have to be lucky to get into the starting eleven. He is far too good to sit on the bench for two seasons.

“He needs minutes very quickly. He’s still young, but time flies. A club like Borussia Dortmund would have been a better step for him. Manchester United is perhaps a step too high for him.”

Van der Vaart has been heavily critical of Manchester United players in the past, including an astonishing attack on United captain Harry Maguire, as per Goal .

The former Ajax and Real Madrid man’s advice to Donny van de Beek is surprising after he had waxed lyrical at the move when it was completed last year.

It is believed (via The Mirror) that Van de Beek will seek talks with Ole Gunnar Solskjær ahead of next season to understand his role in the team moving forward.

Read more: Harry Maguire opens up on ‘bad injury’ ahead of Euro 2020