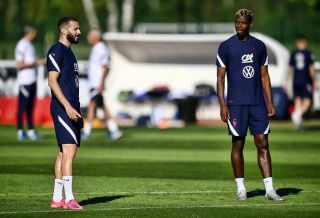 Karim Benzema’s return to the France fold has been the focus of this weeks news from the internationals and Manchester United fans have reacted to Paul Pogba reuniting with his teammate.

The two star players haven’t played together since 2015, just before Karim Benzema was banned from representing the French national team due to the forward’s legal dispute with Mathieu Valbuena.

And it didn’t take long for the pair to show their prowess together on the pitch. Both started Les Bleus first warm-up game ahead of the Euro’s against Wales and just four minutes into the game, a beautiful cross by Pogba was met by Benzema but the Wales goalkeeper kept it out.

Karim Benzema has a good chance inside 4 minutes – lovely hooked cross by Paul Pogba onto the head of the Real Madrid man, but his header is saved by Danny Ward.

United fans might be watching France thinking ‘what could have been’. Karim Benzema was heavily linked with a move to Old Trafford in 2009 but he eventually ended up at Real Madrid where he has become a legend.