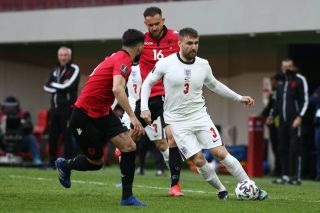 Luke Shaw is one of four Manchester United to have been called up by Gareth Southgate to this summers European Championship, after the England manager revealed his 26-man squad earlier on Tuesday.

Shaw was called up to the March camp earlier this season, his first since 2018, but has found it hard to fight his way back into the England fold after withdrawing from several call-ups.

“I’ve a few massive regrets and I couldn’t stop thinking of the mistakes that I made in the past, especially with England,” Shaw is quoted as saying in March by the Belfast Telegraph. “I pulled out of a lot of camps.”

But the left-back has enjoyed a stellar season for his club this term, winning the Player’s Player of the Year award and now earning a seat on England’s plane to the Euro’s.

After a difficult couple of years, Shaw has emerged as one of the best left-backs in the world and looks like a mature, young man who has learnt from past discrepancies.