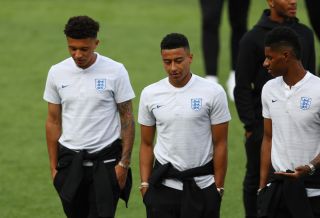 Jesse Lingard is set to start England’s first warm-up game against Austria on Wednesday despite not being picked in Gareth Southgate’s final 26-man squad. The midfielder has enjoyed a career-saving loan at West Ham – his 9 goals and 4 assists in 13 appearances even earned him two England call-ups but not the all so vital one.

Lingard started all games of importance in England’s run to the 2018 World Cup semi-finals but his resurgence in 2021 has proven not to be enough for this competition.

“For me personally, it was very difficult to speak with Jesse, who has given so much for England performed so well for England over a long period of time,” Southgate is quoted as saying by the Evening Standard.

“Those three I gave the option of going home (Lingard, Ward-Prowse & Watkins), but they were all adamant they wanted to stay. They wanted to part of the group. They know they’ll be involved in these two matches.

“They’ll be involved in the games. In fact, I think Jesse will probably start tomorrow.”

England take on Austria at the Riverside Stadium on Wednesday evening in their first exhibition match ahead of the Euro’s before facing Romania four days later.

Some players will see the two games as auditions in order to seal their place in Southgate’s first eleven but for others, like Jesse Lingard, it will mainly be about impressing the manager for future camps.