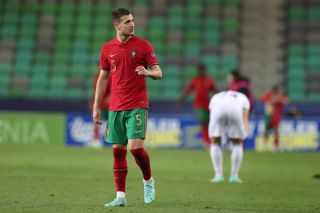 Manchester United defender Diogo Dalot is two games away from winning an international trophy after Portugal reached the Under-21 European Championship semi-finals.

It was an interesting quarter-final match against Italy which went to extra-time after a 3-3 draw, but Portugal came out on top winning 5-3 to avoid penalties.

Although Dalot is 22, he is eligible to play because he was U21 when qualifying for the tournament began.

The Manchester United full-back did not have a game to remember against the Italian, despite the fact he would have been keen to impress after spending the season on loan at AC Milan.

In the 59th minute he looked very shaky in a moment that hurt his side.

Italy and Sassuolo talent Davide Frattesi drilled a low cross first time into the box as club and country team-mate Gianluca Scamacca tapped the ball home from six yards out.

Scamacca was in between Dalot and one of his Portuguese team-mates but the United man stood frozen inside the box as the ball hit the back of the net. It’s unclear what he was trying to do.

In the 87th minute, Portugal found themselves in trouble again after an Italy defender sent the ball over the top to Riccardo Sottil.

Franciso Conceicao then glided down the left-wing before charging at Dalot, who was left outstretched and on the floor.


He needs to perform better if he’s any chance of playing at United.

Dalot will need to improve if he plans on coming back to United and fighting for a place in the team.