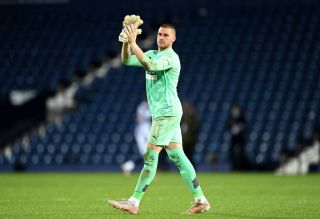 Manchester United want to bring keep Sam Johnstone back from West Brom, according to reports.

Johnstone’s reputation has grown after a strong campaign with the Baggies and earned his first senior England call-up, but sadly he wasn’t able to do enough to keep their Premier League status active.

The Sun claims United have put Johnstone at the head of their wishlist if David de Gea or Dean Henderson go this summer. On top of that, it is noted that Baggies chiefs have been made aware that Johnstone is keen to stay in the top-flight and his contract is up at the end of next season when he can leave the club on a Bosman.

Johnstone is one of West Brom’s biggest earners, so it is an opportunity for them to lower their wage bill, but will they want to lose a brilliant goalkeeper?

No on the cheap, if you believe what is reported by The Sun. West Brom’s valuation is sky high and it could be a problem for United, who I can’t see spending £20m on Johnstone…

That’s a ridiculous asking price for a keeper with just one year left on his contract!

In another report from The Sun this week, United apparently want to sign Jan Oblak if they can use De Gea has a makeweight, with the Spaniard potentially returning to La Liga champions Atletico Madrid.

Nobody would be surprised if Solskjaer wanted to sign Oblak as a replacement for either De Gea or Henderson, but financially it will be difficult because the Croatian is arguably the best keeper in the world.