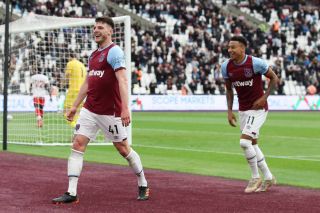 Manchester United are set to make a bid for West Ham midfielder Declan Rice, according to reports.

The England midfielder appears to be among United’s top targets this summer after two impressive campaigns as one of West Ham’s best players.

Of course, the Hammers qualified for the Europa League so they have a lot to look forward to next season, but part of me thinks Rice has come to a stage in his career where he needs a big move.

According to the Evening Standard, United manager Ole Gunnar Solskjaer is ready to swoop in for the star midfielder and splash the cash for one of his priority signings. It is also understood that Rice will not push for a move from West Ham, who value him at a ridiculous £90m.

The problem United have in midfield is they play two number 8’s in a holding position because they have no number 6 with the legs to carry us for 90 minutes. Nemanja Matic’s days are numbered but so are the days of Fred and Scott McTominay trying to find a midfield duo.

West Ham could end up pricing Rice out of a big move and I don’t think that will end well for them.

Is Jesse Lingard planning on returning to West Ham for next season?