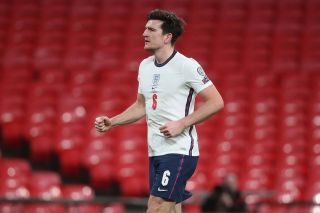 Harry Maguire is reportedly recovering well from his injury – ahead of England’s European Championship campaign.

I’m not going to lie and claim to care about England’s chances at the Euros, but having Maguire available will certainly be a boost. Ultimately, it’s just a huge shame that he was missing in Gdansk.

Maguire tends to split opinion a lot but his spell out of the United’s XI should see some supporters rethink before being overly critical about our captain.

Ole Gunnar Solskjaer has always held Maguire in high regard crediting the defender as crucial to his setup and dressing room. I’d imagine it is the same when he’s away with Gareth Southgate’s England squad.

According to the Daily Mail, Maguire is confident he will be fit for the Euros as he steps up his rehab for England. He will also pop into Carrington for more treatment with the deadline date to be fit set for June 13.

While his return is good news for England, it might not be the best for United. The last thing we want to see now is him being rushed back and missing the start of next season.

I already have my fears for Marcus Rashford ahead of the start of next season — as revealed on the latest Strettycast.