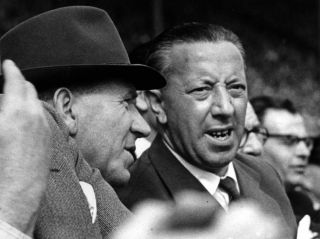 Jimmy Murphy is to be honoured by Manchester United with a well-deserved statue at Old Trafford.

Murphy worked for Manchester United in a number of different capacities between 1946 and 1971, but is best known for taking charge of the first-team in 1958 while Sir Matt Busby recovered in hospital following the Munich air disaster.

Also in charge of Wales at the time, Murphy missed the fateful European tie in Belgrade due to his Welsh side being involved in a World Cup play-off against Israel a day earlier. They won and secured qualification for the 1958 World Cup in Sweden.

The Daily Mail claims the memorial to Murphy, who died in 1989, follows a campaign by United supporters’ groups and their former players’ association.

This is someone we should celebrate. Murphy is as important a figure as anyone in the history of Manchester United.

Just last week, Shola Shoretire was named the Jimmy Murphy Young Player of the Year for 2020/21. The young forward was rewarded for his performances, primarily for the U23s, although he did make a couple of appearances for the U18s and first-team.

Shoretire only turned 17 in February and we think he’s got a bright future ahead of him.