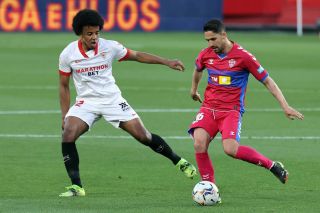 Following his relentless links to many top-tier European clubs, including Manchester United, Sevilla defender Jules Kounde has spoken out publicly.

Since arriving in La Liga, the commanding young centre-back has featured in 89 matches, in all competitions.

Widely regarded as one of Europe’s most exciting young defenders, the French defender, who has three years left on his deal, has emerged as a transfer target for Ole Gunnar Solskjaer.

Seemingly on the Red Devils’ shortlist for potential summer signings, many fans would like to see the 22-year-old arrive at Old Trafford during this summer’s transfer window.

Speaking to reporters recently (as quoted by MEN), Kounde, when asked about his future, said: “Regarding my future, it is certain that I will perhaps be brought to change this summer, but nothing is acted yet, I did not decide anything,” Kounde said.

“My objective is to evolve at a big club, to always try to progress and win trophies, too.

“I may have to move, but it is not on the agenda.”

Despite being keen on the 22-year-old, there have previously been concerns over the defender’s whopping £68m release clause, as per Daily Mail.