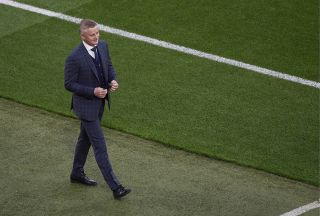 As I write this, the overwhelming sense of agony remains. It was to be the baptism of our next generation and instead, we’re left with the familiar feeling of ‘what if’?

There are many negatives highlighted from Wednesday night’s defeat and, without question, they are indeed warranted. The team lacked any real cutting edge and this was compounded by questionable decisions from the sidelines. The game is finished, the result solidified and Ole Gunnar Solskjær’s wait for a trophy continues. However, despite all of this, there is not yet despair, and it would do everybody a great deal of good to take stock in the past two years.

As a player, Solskjær left it all on the pitch. As a manager, he is the literal definition of a man that is trying to reconnect the squad with the fundamental ethos of being Manchester United. This is a task that he inherited and has spent the past two years cultivating. Admittedly, a trophy would make this explanation easier and without such, the same old bunch will gnaw away at any incidental fact. Without question, everybody is entitled to their opinion and should have such without the introduction of hate. In the same vein, ignorance toward obvious progression is nothing other than that – ignorance!

As the curtain closes on the finale of Solskjær’s second full season in the hot-seat, there is much to reflect upon. There are negatives – such as that discussed above – but there are many positives to celebrate. As a regular on the world’s most renowned footballing social platform, there’s an expected contingent who’ve craved for this moment. That, in itself, is an inevitability and one which can supply ample ammunition for those keen to ignore the actual progression on display.

In relation to the league, Solskjær inherited a side that had endured its worst 17-game start since 1990/91 (26 points collected from a possible 51). Since that, we’ve witnessed consecutive top four finishes, growth on final positions and a perennial decrease in the distance from reaching number 21. As a side piece, no side have completed the double over United and Chelsea are yet to place higher than the Norwegian’s side.

As well as the progression in closing the gap, United became the 4th side, in top-flight history, to remain unbeaten (away) for an entire season. Expanding on this, United have not suffered domestic league defeat (away) since January 2020.

The media can’t help themselves with the old comparison. The one that went away very quietly, was that of the trio talk in Ole, Lampard and Arteta. To clarify, Lampard has since lost his job, Arteta has steered Arsenal from 10th to 8th to 8th and Ole has gone from 6th to 3rd to 2nd. Bizarrely enough, it is the reputation of our Norwegian that appears to be continuously targeted.

It’s common knowledge that the players are extremely fond of the manager. His man-management skills have been praised by several members of the team and one need only look at Luke Shaw to see its benefits. On top of this tremendous trait, our proud tradition of promoting from within has been front and center: with 16 academy graduates having made their senior debut since Ole’s appointment, and Greenwood, Williams and Elanga registering their first senior goals.

As I’ve said, it’s not all been plain sailing and there’s much to be critical of. There’s been plenty to solidify the progressive nature of the managers tenure but, a lack of silverware will inevitably catch-up with anybody. A melee of semi-final defeats, coupled with last night’s disappointment, has left fans disenchanted. Ultimately, a team can progress year on year but there needs to be something to show for it.

Despite much disappointment, I firmly believe that the manager has earned the right to be backed this summer. He has achieved so much with such underwhelming support from the owners and endured a daily bashing from media, fans and ex-professionals. There’s this deluded ideal that a continental replacement will unlock some sort of hidden magic and it’s simply convoluted. It’s an idealistic take on a far greater problem: the same problem that has taken the head of three veterans beforehand. However, with this backing and sign of support, the onus will certainly be on the manager to return silverware and I would back this particular ideal.

This season has been progress without being a success. Ole himself acknowledges that last night’s performance was not good enough. He is a fan like you and I, but he has the ability to bring glory days back to United. To conclude with the words of a very wise man – ‘As human beings, you have to understand that adversity is part of your life’.