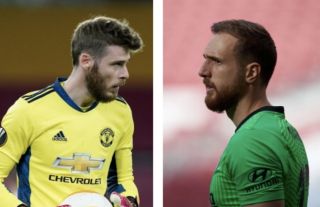 Manchester United’s hierarchy is reportedly considering including goalkeeper David De Gea as part of a deal to bring in Atletico Madrid’s Jan Oblak.

That’s according to The Sun, who are reporting the Red Devils are looking to finally resolve their goalkeeping issues.

For months now, both Dean Henderson and David De Gea have been rotated in between the sticks. Ole Gunnar Solskjaer has clearly struggled to settle on either keeper with both shot-stoppers featuring heavily but both failing to nail down the number-one spot.

If The Sun’s most recent report is to be believed, this summer could be the time when the Norweigan brings in a new face altogether.

It’s been claimed that in a desperate attempt to clear De Gea’s whopping £375,000-per week wages off their payroll, the Red Devils will include him in an offer to Atletico Madrid for Oblak.

Having just claimed the La Liga title, Atletico Madrid’s number one has seen his stock continue to rise – reportedly valued at around £70m, United’s inclusion of De Gea in any deal will likely see that figure significantly reduced.