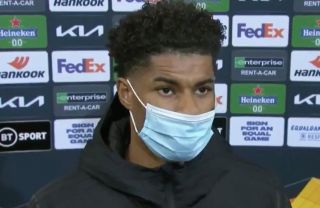 Rashford explained that there is a real feeling of disappointment in the dressing room – after working hard throughout the season, scarifying a lot and wanting to end it all on a high after finishing second in the Premier League.

When the players are over the disappointment of tonight, Rashford says they will re-watch it to see where they can improve. It didn’t help that so many players underperformed tonight – and the side was tactically outclassed — or the fact Rashford missed a match-winning opportunity in normal time.

David de Gea’s goalkeeping for the penalty shoot-out was far from perfect either.

But we’ll be back next season. The fans to lift these lads back up again, hopefully with strong additions from the summer transfer window, to go a step further in the Premier League.

Rashford added that the team won’t give up and it’s not something that would happen on Solskjaer’s watch. He believes there’s enough desire, talent and everything needed at United to compete at the highest level.

Ultimately, he’s mature enough to accept there can only be one winner. We get nothing for finishing second in the league or the Europa League, so empty-handed again.

"The club, the desire, the hunger, the talent, the ability, the squad. We have everything to compete at the highest level."

That one hurt Marcus Rashford.

A passionate post-match interview where he holds nothing back…