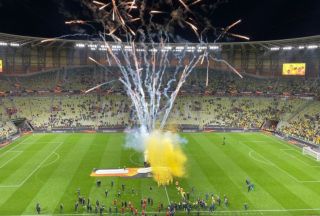 Sunk by the yellow submarine.

It’s a tough one to take, losing the Europa League final tonight in Gdansk.

The opportunity to end the season with a trophy has gone wasted, after all our hard work to finish second in the Premier League – to improve on last season’s third place finish.

Villarreal did well on the night to nullify United without dominating many phases of the game. United were on top for the majority of the match but couldn’t finish their opponents off in 90 minutes or extra time.

A penalty shoot-out took place with everyone on the pitch scoring one – bar David de Gea.

His technique when attempting to stop Villarreal’s penalty seemed well off. Like he wasn’t jumping anywhere near high enough – expecting every penalty to be drive low into the corner.

De Gea wasn’t the only player we can be unhappy with tonight. Marcus Rashford put in one of his worst performances for United and missed an absolute sitter in normal time to win the game.

Simon Peach, who is reporting at the game for Press Association, uploaded a picture of Villarreal celebrating their first ever major trophy – taking them no longer than 98 years.

It’s always painful to watch the opposition lift the trophy. The dressing room must be quiet after seeing that.