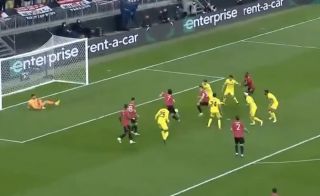 This is why they bought him folks! – Manchester United star striker Edinson Cavani has levelled things up against Villarreal in Gdansk, Poland.

Despite started the game well, the Red Devils fell behind to a Moreno goal at the mid way point of the first-half.

With the game entering the second 45 and looking for a route back into the game, striker Cavani has given his side a monumental boost.

Being the fox in the box that he’s based his entire career around, the South American was once again in the right place, at the right time.

That man delivers a crucial goal once again!