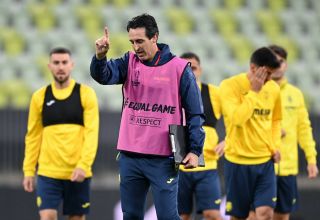 Unai Emery once had a conversation with Manchester United legend Sir Alex Ferguson in which he defended the Europa League.

Emery’s Villarreal side take on United in the Europa League final in Gdansk tonight, with the former Sevilla manager looking to win the competition for a fourth time.

We go into the game as favourites against a side that finished seventh in La Liga, so as long we show the right level of respect, I can’t see us having too many problems. Villarreal will make it difficult for us and they will try to slow down the pace of the game.

Emery told ESPN why he believes the Europa League deserves respect and how he once told Ferguson – who is in Gdansk with the squad – why he loves the competition.

The former Arsenal manager said: “In [a] meeting in Nyon, Switzerland, where the elite coaches meet, I once launched a defence of the Europa League because it was a competition that has brought happiness to many teams who couldn’t win the Champions League.

“Basically, eight teams can win the Champions League, although there’s an exception every so often. The rest of us compete happily in the Europa League and it makes our fans happy to compete for a title, share those moments, that enthusiasm.

“It’s a competition that I feel comfortable and grateful to be in it. And since then, paradoxically, United have spent a few years in the Europa League and they want to win it. That’s happening more; that’s what makes this competition great. We want to compete for it and we feel proud to do that.”

It’s clear that Emery knows he has nothing to lose in the final later on. He will want to encourage his players to approach this as the biggest game of their careers, whereas for United it’s a potential gateway for more success.

“There is no complex,” Emery added. “Villarreal are recognized now, consolidated. Those complexes get left along the way.

“It’s not a complex; if it’s anything, it’s a challenge to take one step further.

“I was lucky enough to play Liverpool in the final with Sevilla and beat them. That’s [the size of] clubs Villarreal have competed with. There’s a path that is established now, a credibility that this club has earned. So, there’s no complex.

“You face Arsenal or Manchester United and this team has answers, it can perform. It can take them on in the final. And that’s our objective.”