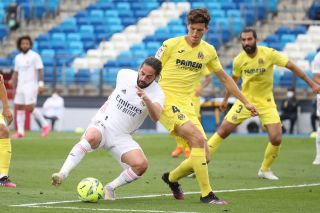 If you’ve been keeping up to date with Stretty News and the Pau Torres speculation, I don’t think any of this will come as a surprise.

Villarreal star Pau Torres insists he does not see himself leaving the La Liga outfit despite reports in the media suggesting that Manchester United were prepared to meet the player’s buyout clause in their search for a new centre-back.

The Spanish centre-back will line up for Villarreal against United on Wednesday night and says he is looking forward to competing with Ole Gunnar Solskjaer’s side for the Europa League trophy.

The 24-year-old and impressed a lot of people with his performances this season but Stretty News understands that United’s haven’t pursued the player in recent months.

Torres was asked about his future and played down speculation that he could join United this summer.

“For now I only think as a player dressed in yellow, I see my life linked to this club. For now I have a contract here [until Junes 2024] and I do not see beyond this final or what may come this summer,” Torres told the Pure Football Podcast with Guillem Balague.

“God willing I can be in the Euros. I only want the first title for my club, for my people, and then to represent Spain in a tournament as big as this.”

Right now, Torres is understandably focused on facing Edinson Cavani, Marcus Rashford and Mason Greenwood – not to mention Bruno Fernandes and Paul Pogba on top of that.

“When I hear the names of important strikers, what I want to do is to face them. The same thing happened to me in my first games against Real Madrid, Barcelona… I knew that I would face very good players and the only thing I have in mind is that I will face very important players and that way know where my level is.

“Manchester United have world-class players in all positions. It will be a test to measure just where Villarreal is at this moment, to see if it is prepared to achieve great things.

“I am one of those who thinks that the final is here, that we have to prepare for it very well because we are playing against the number 1 candidate to win the title, and that we also have time to prepare well for the final.”