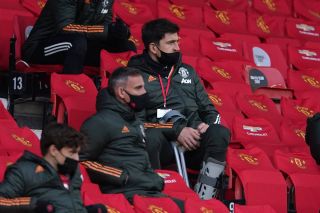 Manchester United take on Villarreal tomorrow night in the Europa League and Ole Gunnar Solskjaer has held a pre-match press conference after travelling with the squad to Gdansk, Poland.

The boss was immediately asked by reporters about club captain Harry Maguire, after missing recent matches with an ankle injury, and it doesn’t sound like he will be making an appearance on the pitch.

“Harry is just going to jog up and down the side line a bit I reckon,” Solskjaer said, as quoted by the Manchester Evening News.

Obviously with it being a final, Solskjaer is forced to make big decisions and leaving players out is part of the process. Sir Alex Ferguson would probably tell you these were the hardest moments of his managerial career, and we already know that two players feel their future depends on what happens in Gdansk.

As captain, Maguire could still have a role to play on the side line as Solskjaer hints.

His presence will be felt on the pitch by his team-mates who will be aware of how much he’d like to be playing in the final.

But it will be interesting to see who starts against Villarreal in defence.

I have a sneaky suspicion it will be Axel Tuanzebe and Victor Lindelof. The Swede will start but he’s never been able to form a formidable partnership with Eric Bailly.

One response to “Team news ahead of Europa League final: Harry Maguire role on the side”