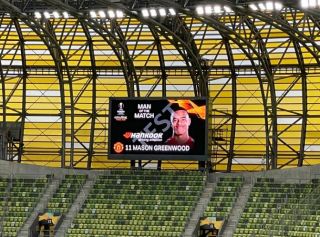 In their pre-match testing procedure, operators at the Stadion Miejski were checking their visual and audio systems, and in one of those tests an early prediction for Mason Greenwood to be man of the match was made.

They even had a sample picture created by a graphics team!

So, is the writing on the wall? Greenwood to run riot against Villarreal and guide Manchester United to European glory. What a fascinating story that would be as a gateway to more success.

I’m excited if you can’t tell already. It’s great to have finished closer to the top of the table knowing there’s still a trophy to be won.

We had a little scare tonight after the open training session with Eric Bailly requiring treatment, but there’s been an update to say he walked off the pitch perfectly fine.