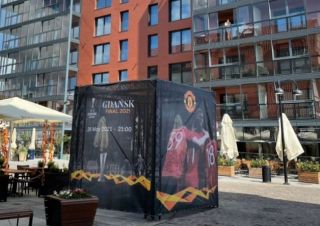 Gdansk is the host city for this year’s Europa League and Manchester United are hoping to win the competition for a second time since 2017.

On the other hand, Villarreal are trying to win their first ever major trophy in 98-years of history, so there is a lot of the line as we approach the game.

Association Press journalist Simon Peach has arrived safely in Gdansk before taking several pictures to show how the city looks ahead of the final.

Gdańsk getting into the #UEL final mood, with #MUFC & Villarreal images dotted around the city pic.twitter.com/ABZ7urZzNa

The sun is shining and restaurants are open for outdoor dining.

Let us know how you think tomorrow night’s game will go with some predictions in the comment section below.

Will Harry Maguire pass a fitness test in time? He was named in the England squad earlier today.