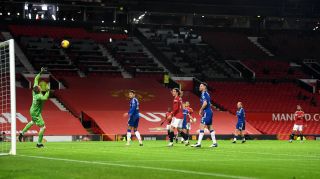 Manchester United have secured a runners up finish as the most uniquely congested season in Premier League history was wrapped up on Sunday. Ole Gunnar Solskjaer’s side may have ultimately fallen short of the title, but it was a campaign of considerable upward trajectory, improving on last season’s showing both in terms of league position and points tally.

Solskjaer’s side of course still have the chance to end the campaign with a trophy ahead of Wednesday’s Europa League final with Villarreal in Gdansk.
As ever, there have been some magical moments with a showreel of spectacular strikes, thrilling games, eye-catching individual performances and the highs and lows that came into a 50-odd game season packed into eight months.

Here, I take a look back at the 2020-21 season’s top five best goals, starting in reverse order and explaining the reason for my choices.

Paul Pogba’s penchant for the spectacular came to the fore again with a second half winner at Turf Moor to send United to the Premier League pinnacle. Burnley, even without fans packed into the small confines of Turf Moor, is never an easy place to go and so it proved again here. The Reds had dominated the game but had been continually thwarted by the Clarets resilience and resolute physicality and organisation. On a wet, grim night in east Lancashire, it always looked as though we would need something special – more individual brilliance – to finally break through. This was a goal we included perhaps more for its context, the importance of it, rather than the actual goal itself. Make no mistake, it was a great finish from Pogba and a superb cross from Rashford, but there was an element of fortune about it with a deflection off Matthew Lowton. The Frenchman’s connection on the volley was perfect, but Nick Pope may well have saved it if not for the inadvertent contact off his right-back.  Nonetheless, it made the decisive difference and sent United top in January for the first time since the retirement of Sir Alex Ferguson.

This goal was a shoo-in for our shortlist as it, in many ways, epitomised our season. Having fallen behind early on, United levelled through Harry Maguire but time was ticking away as the match entered its final furlong with the tie on a knife edge at 1-1. A team goal finished off with a dash of individual brilliance, everything about this one oozed class. Starting with the lesser spotted Donny van de Beek deep in his own half, the Dutchman moved the ball in field to Fernandes and he in turn found the cantering Marcus Rashford down the left. United’s no.10 looked set to go it alone, and indeed the back-pedalling Magpies defence seemed to think the same, getting sucked into the middle as Rashford continued his run.

No one had spotted Fernandes as he arrived in the penalty area late, ala Paul Scholes. No one that is except Rashford, whom deftly back-heeled the ball into the path of our no.18. Fernandes took a single touch to get the ball under control and hammered an unstoppable finish high beyond Karl Darlow into the top corner to get United’s season truly up and running after two defeats in the first three games. This fabulous finish set up a late surge as Aaron Wan-Bissaka and Rashford himself saw us emerge with a perhaps slightly flattering victory. A goal later voted as the winner of the October goal of the month

Eight days on and another midweek away day against lowly but obdurate opposition. Again, United fall behind but again individual brilliance digs out an important victory. In yet another climb off the canvas win, Edinson Cavani puts us level but the stage is set for Pogba, again, to add to his growing collection of belters. Seizing on a mishit and wind assisted clearance, Pogba dribbles away from his marker, spins past another Fulham defender and lets fly with a 25-yarder on the edge of the penalty area. Alphonse Areola is beaten all ends up as the effort whistles past him and into the postage stamp. A stunning goal in its execution, its technique and its importance – what a hit, son, what a hit! United go on to carve out the result (just!) and were showing, dare we say it, the hallmark of champions. Just as he did at Burnley, Pogba popped up with the goods when it mattered and returned the Reds to the summit. At this stage, we dared to dream.

A seminal moment in the season as fans returned to Old Trafford after 14 months of behind closed doors football. There may have only been 10,000 inside the famous old ground, but the place erupted after 15 minutes of what was, essentially, a dead rubber. Scott Parker’s Cottagers were already down and United are certain to finish second but try telling that to Cavani. The United faithful have taken the veteran Uruguayan to our hearts and it’s easy to see why on this evidence. David de Gea bunts the ball long, Bruno Fernandes flicks it on (or does he) and Cavani raises the roof with a stunning lob over Areola from 40 yards. The ultimate showman, off the back of a new one deal, fulfils his wish of playing in front of fans at Old Trafford. Cavani may have been offside, but so good was the goal it would have been a travesty had it been ruled out. A perfectly executed finish from an improbable distance majestically floated into the net – it was a shame this absolute thing of beauty didn’t turn out to be the winner as Fulham’s Joe Bryan headed a late leveller. Give it give it give it to Edi Cavani!

63 years on from the tragedy on a snow covered Munich runway, Bruno Fernandes channelled his inner Duncan Edwards with quite possibly the greatest goal Old Trafford has ever seen. This sizzling strike won United’s goal of the season and it tops our choice too – it’s a no brainer and words alone cannot do it justice. Where to even start with this goal? It begins in midfield as Fred rolls the ball forwards into the path of the Portuguese. He shapes to shoot but doesn’t and instead plays an outrageous dummy and allows the ball to run on to Aaron Wan – Bissaka. United’s right back returns the favour to find Fernandes, but there’s still a lot of work to do and a cross into the box seems the better option with Cavani lurking. But not for Fernandes is the simple and the safe – he takes a touch to set himself, shimmying past Tom Davies to create space and whip a rapier-like curler over Ben Godfrey and beyond the gasping Robin Olsen in the Everton goal. It gets better every time you see it. Think Eric Cantona vs Sunderland in December 1996. A striker unsurprisingly voted as United’s best of the month, the pick of the bunch in the Premier League for February and our goal of the season. You can imagine the reception he would have got from a packed out Old Trafford after this astonishing effort. Portuguese magnifico!