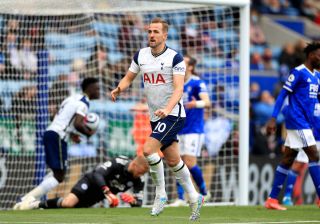 It could take as much as £200m for the transfer of Tottenham striker Harry Kane this summer, according to reports.

The England international is one of the best players in the world, and could now become one of the most expensive of all-time with it looking increasingly likely that he will leave Spurs at the end of the season.

There is a problem, however, with the amount of money Spurs are asking for in exchange and I can’t see many clubs being able to afford that this year.

According to the Independent’s sources, Spurs would demand an asking price of £200m for Kane as Manchester United, Man City and Chelsea are all linked with this season’s Premier League top scorer.

I fear that if United were to pay that they wouldn’t be able to strengthen other areas of the team – for instance, in defence we can’t ignore the fact a world-class defender is needed alongside Harry Maguire for the next campaign.

Kane would represent a major upgrade for all clubs but it’s a hefty transfer fee.

The striker made it very clear in an exclusive interview with Gary Neville last week that he wants to leave Spurs.

We can imagine that meetings have already been held between Kane and Tottenham’s chairman Daniel Levy, a shrewd negotiator who everyone knows won’t leave his best player leave easily or on the cheap.

I can see this saga dragging on for a while.