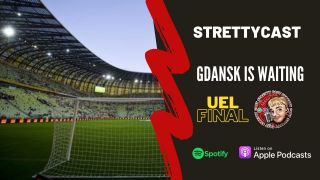 I preview the Europa League final between Manchester United vs Villarreal on the latest Strettycast, and we hear from Andy about his experience being back at Old Trafford for the game against Fulham when 10,000 Reds returned after a long season without such luxuries.

The biggest talking point ahead of the game on Wednesday night is who will start between the sticks?

Stretty News understands that David de Gea is set to start against Villarreal in Gdansk, potentially casting doubt over Dean Henderson’s future which I discuss on the podcast.

Although it’s a huge blow to be without skipper Harry Maguire, I find enough reasons to be optimistic as United look to continue their brilliant record against Spanish teams.

Finishing second place in the Premier League is by no means an achievement. It’s a clear sign of improvement – but winning the Europa League means bagging a trophy.

We all need that — Solskjaer, the players, the fans.

We will have a bonus episode to reflect on Wednesday night’s final.

Send us your pre-match predictions below in the comment section and subscribe to the Strettycast for more United podcasts throughout the summer.