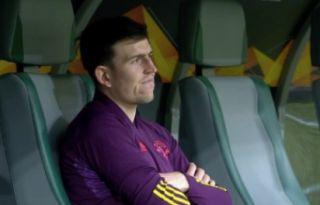 If you haven’t already forgotten about Harry Maguire playing in the Europa League final, it’s probably time to stop hoping because it would be a miracle at this stage.

The Manchester United captain is almost certain to miss tomorrow night’s game against Villarreal due to an ankle injury which has kept him out of recent matches.

With that, it looks like Maguire’s season is over. Now it is up to his team-mates to ensure they all leave Gdansk with a trophy to their name and winners’ medals.

According to the Manchester Evening News, Maguire was one of the first players off the team coach when it arrived at Stadion Gdansk, where the final will take place. He sat and watched from the dugout while the team trained.

The injury was sustained on May 9 and he only has one week to prove hit fitness to England manager Gareth Southgate, after making his preliminary England squad for Euro 2020.

Solskjaer has maintained that he will wait until Wednesday – before naming his team – to see whether Maguire can make it. And he sounded pessimistic at his press conference earlier today.