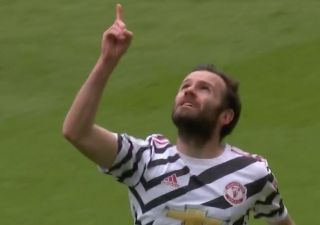 A reckless challenge – but enough to warrant a penalty? I don’t care now because Juan Mata scored from the spot to give Manchester United the lead at half-time.

It’s 2-1 as the Reds go in at half-time and the home support are not happy with the penalty decision before the half-time whistle.

I think the penalty is a soft one. There’s contact but probably not enough to force Donny Van de Beek to the floor, but we’ll take it and Mata made sure to stick it in the back of the net.

There’s a lot of fringe players getting a run today so it’s positive to be ahead at half time.

If this is Juan Mata's last Premier League game for Man Utd, he's capped it with a goal from the penalty spot.