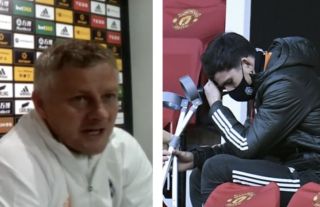 After picking up an ankle injury five games ago, Maguire, who has recently been spotted walking around on crutches, looks increasingly more likely to miss out on next week’s European final.

Confirming the grim news that his skipper is losing the race to be fit enough in time, Solskjaer said: “I’ll wait for Wednesday.

“Maybe see if he can run on Tuesday but still he’s a bit away.