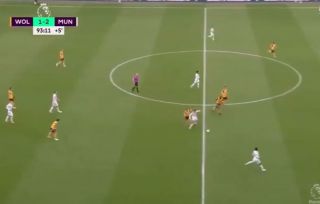 Hannibal Mejbri played for 10 minutes on his debut today and was still able to showcase his skills during Manchester United’s 2-1 win over Wolves.

The French youngster, who was signed from AS Monaco in 2019 for a hefty fee, is regarded as one of the best players coming through at United.

Earlier this week he was named as United’s U23s Player of the Year.

The 18-year-old was rewarded for his performances in the youth teams this season with a senior debut in the Premier League against Wolves. He replaced match-winner Juan Mata as we approached the full-time whistle.

Hannibal showed some impressive footwork to embarrass Willy Boly with a cheeky nutmeg.

The youngster was pulled to the ground before winning a free-kick for his efforts.