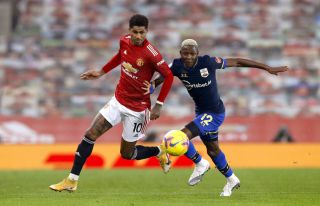 Marcus Rashford gave an in-depth interview this weekend and he didn’t play down suggestions that he could one day leave Manchester United as a player.

When asked about taking his talents abroad, Rashford told The Guardian: “I would never say no.”

He was then pressed on the matter, saying: “Other than United? I’m a big fan of Real Madrid and Barcelona, because they’ve always had great players and played attractive football.

“Everyone watches Real Madrid and Barcelona.”

As a side note, I must admit I enjoyed watching both Real Madrid and Barcelona crumble as Atletico Madrid took grip of the La Liga title yesterday, on the final day of the season.

Interview: @MarcusRashford ‘Whenever I hear “no”, I ask myself: why not?’ By @shattenstone https://t.co/gL3wQZTdno

I don’t think we need to worry about losing Rashford anytime soon, but maybe if this team can start winning Premier League titles, we won’t need to worry about it. The same applies to Bruno Fernandes because he won’t stick around forever if the team isn’t winning silverware.

United will always have a bigger pull factor than most clubs – but it should be providing its players with winners’ medals and trophy after trophy.

I hope this story goes away and doesn’t become a saga after being picked up by the back pages in Spain.