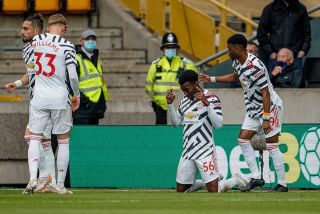 Manchester United have gone the entire Premier League season unbeaten away from home.

The Red Devils set on their travels to Molineux this morning for a 4pm kick-off. Goals from academy star Anthony Elanga and Juan Mata sealed the win to ensure United remained unbeaten on the road in the league.

You would think with fans back at Old Trafford next season that our home record will improve. They’ve definitely missed the atmosphere and our fringe players performed pretty well against a hostile 10,000 Wolves fans, who were calling for everything after conceding a controversial penalty.